California has long been fertile ground for other states’ economic developers to visit and lure businesses to relocate away from the Golden State.

↵ Back to blog
Anatalio Ubalde
Managing Director and Co-founder

April 1, 2016 (SACRAMENTO) - California has long been fertile ground for other states’ economic developers to visit and lure businesses to relocate away from the Golden State. That changed today as Governor Brown passed a new law that will stop economic development organizations coming to meet with and poach these homegrown companies. 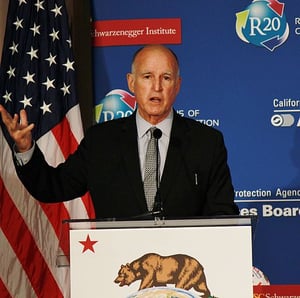 “With my signing of State Bill OU812, also known as ‘Perry’s Law,” California is putting an end to the hurtful practice of desperate states coming to California to try to steal away jobs they didn’t create,” said Governor Brown at a huge rally on the steps of the State Capitol. “Tomorrow we will begin building the second largest wall in the world to prevent these out-of-state economic developers from coming to California to murder our economy. This wall will keep these murderers out,” said Governor Brown.

The California Public Works staff is currently working on plans for building the 50-foot wall. They are getting advice from the cost estimators used for another wall under consideration in the southern USA. “If the cost of building a 50-foot high wall is too expensive, we also have an alternative option to build a 4-foot high wall which will at least prevent these economic developers from being able to drive into California. No car is going to be able to get over a 4 foot wall,” said California Public Works director Mike Romanage. "We are using ZoomProspector.com for our site selection analysis to optimize the wall location."

A post-signing ceremony press conference unaffiliated with the Governor’s office included an unlikely coalition of corporate, union, liberal, and conservative leaders praising the new law. “We have good California jobs employing good Californians with good California wages. We shouldn’t allow these jobs to be taken away and moved to low-cost countries like New Mexico,” said Eileen Tudor-Wright.  Another panelist, Allen Doodalift, explained that New Mexico isn’t actually another country. Rebutting his accusation, Todor-Wright replied, “I don’t think that’s true. The next thing you’re going to say is that Baja California isn’t in California. Of course it is. That’s why California is in its name.”

The press conference was concluded with a PowerPoint presentation including many bulleted lists. “This is a bi-partisan bill that our Californian elected officials have come together to support. In addition, statewide polling showed the overwhelming support of 6% of Californians for the construction of this wall,” said Mark Iaveli, a political lobbyist from Bea Esser and Associates. “This was evidence enough to proceed with what will be largest public works project in California history.”

Although this legislation is new, the issues that lead to it are not. “The reason that economic developers keep coming to California to recruit our successful companies is because California keeps producing them. California companies, especially in the technology and entertainment industries, are replacing the previous business titans on the S&P 500. These other economic developers wish their states created these companies, but because they can’t, they have no choice but to come to California,” said Ned Yurbitnitz, Executive Director of Squad California, explaining the context of how this political hot potato became a state priority. “Now our Governor is using old California technology for a new purpose – walls. A lot of people don’t know that walls were invented in California, but they were. Before we invented them the wind would just go right through buildings.”

Teich Ubdate, a well-respected economic developer in California and Vice President at GIS Planning, was asked for his opinion about this new state economic development strategy and he responded saying, “You must be kidding. What’s today’s date? Is today April Fools?”

For more information about this economic development initiative, please note the date it was published.